A Capella group popular for their dynamic, interactive and humorous performances. 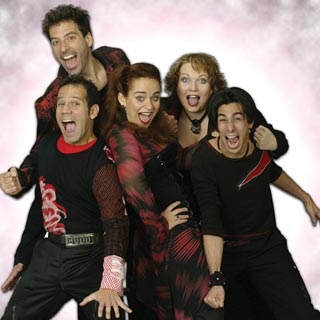 In 1998, Vox Audio was born as “Toxic Audio” at the Orlando International Fringe Festival with the simple concept of creating a fun & interactive show starring the human voice. The show was an instant hit with fans and critics alike, and was hailed as “surprising, dazzling, and brilliant” by The Orlando Sentinel. They also caught the attention of Disney executives, who hired them as featured performers at the Disney/MGM Studios!

Vox Audio has gone on to win first place in the National Harmony Sweepstakes, be named “Best Pop Group in America” by Ed McMahon’s Next Big Star, and have the Contemporary A Capella Society of America deem their album Chemistry as “Album of the Year.” The group has also spent time as the top-ranked guest entertainers on Royal Caribbean cruise ships, garnered national attention with appearances on ABC, Fox, ESPN’s Cold Pizza, and won rave reviews for their Off-Broadway Show, taking home the prestigious Drama Desk Award for “Unique Theatrical Experience.” They have performed for sell-out crowds both nationally and internationally, and the group continues to electrify audiences worldwide, as they explore the boundaries of the human voice.